I came back to my Arduino projects after a break. I was busy, it’s true, but there were days I could have made time. There were days I lounged in front of the tv or stole those hours to play video games. I told myself I didn’t have time to devote. I told myself I needed to socialization and that this project was too indoorsy for the weather. I was busy living the excuses I had made.

I guess this past week it affected me and I should tell you the story. I had a phone interview with a big tech company in my area. On my resume are a number of interests and online classes I have pursued. Listed are subjects like Geology, Early Childhood coding, Mindfulness, and Machine Learning. During my interview, the hiring manager was asking about my curiosities.

“I’m really interested in Mindfulness and I have a lot of questions, but first, tell me what you know about Machine Learning.”

Innocently, I began to explain the labor dynamic between coding and implementation. I started to go into uses for computers to gather information and make predictions and find patterns. Then I stopped myself.

“How much do you know about the subject already? I don’t want to ramble.” I said to the interviewer.

“Oh I already know about Machine Learning,” he informed me. “I just want to see what you know.”

I was shell shocked by that kind of attitude. What kind of person, when faced with an option to either learn from someone or challenge them, chooses to challenge them? Why would this person not take the opportunity to learn something new? Why was I immediately tested? What kind of culture does this company promote? Had I not been a woman, would he still have challenged my knowledge?

Those are big, complicated questions but they have been incubating in my mind for the past few weeks. They were on my mind each day I looked over at my Arduino supplies. Those questions were on my mind as I plugged in my first wire today. I thought about them as I altered my project from a series circuit to a parallel circuit and beyond. I turned LED lights off and on today, but felt like an imposter doing it.

Here’s the thing: sometimes succeeding is scarey. Even if I am unhappy in my environment, at least I am comfortable. That change of comfortably unhappy to happily uncomfortable is part of the process of risk taking. I decided to allow myself as much time to resist or freak out as I needed, then, to come back once I had the focus. I know the world I am entering. One of criticism and control. With so many people challenging my capabilities, I made the choice to be my own advocate. The world may judge me, but I refuse to feed into that. So I dove back in, when I was all out of excuses and ready on my own terms. After all, it is less about the world I am entering and more about the world I am creating.

There was some introductory reading before hand. I learned a few basic electrical terms and was reminded about the nature of electricity. Note to self: always unplug the circuit board before altering components. I became a bit more familiar with my breadboard. I followed along, placing wires, switches, resistors, and LEDs. Using the words and pictures helped, but I was really wishing for a bunch of black jumper wires so I could always keep track of grounding. I attached 2 buttons, but there was further “homework” to try out attaching more. I am going to wait on that and show my roommate all the stuff I learned. 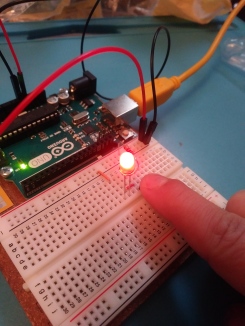 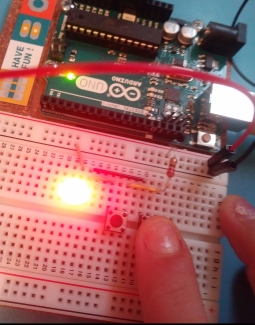 Feelings: Ready to learn! Some figuring out, but I’m ready!

After making the choice to sit down and work on a project, I felt immediately proud of myself. I had a rush of confidence when I problem solved tiny snafus. I got excited to think about other ways to apply this new knowledge and ways to tweak it. I learned a lot about powering through emotion.  Trying to make less excuses and live with truth.

Next Up: Spaceship Interface. Whaa!!